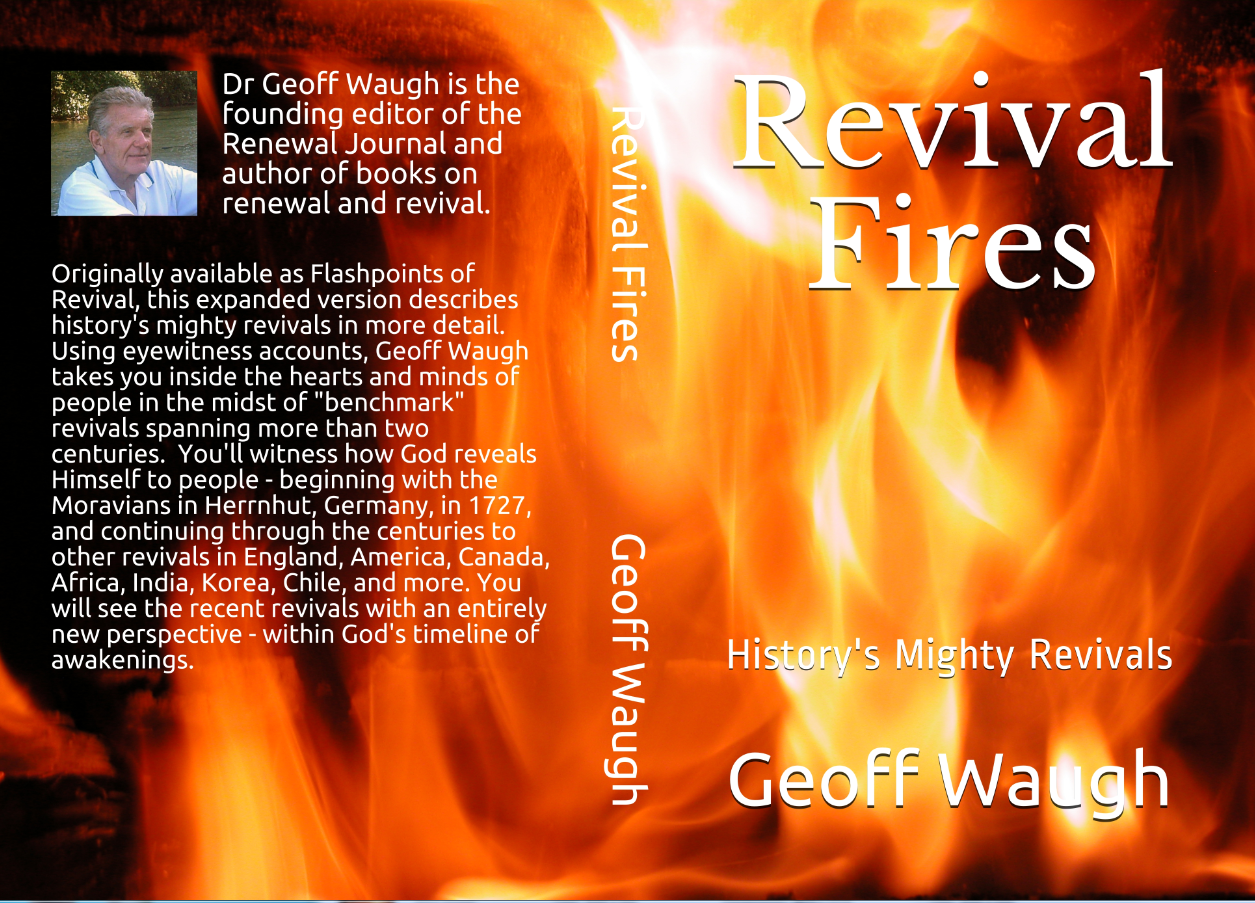 Geoff Waugh has his finger on the pulse of what God is doing in revival. This book will help you get a greater vision of the heart and power of God.  Steven Loopstra

Refreshing, exciting, thought-provoking! It was right down my alley as a student and participant in search for historic revival in our day.  Amazon customer

Modern Day Eusebius
Like Luke, Geoff Waugh bears witness to this generation of the works of the Holy Spirit through the Body of Christ after the close of the Book of Acts. As the children of Israel were instructed to diligently teach their sons who asked, “What mean the testimonies?,” he declares what God has faithfully performed on behalf of His people. With all the unbelieving voices around us, Waugh’s reminder of God’s unending power and intervention will give you hope.  Fundacion Efrain
Kindles the flame
I have read a number of accounts of revivals, including Wesley Duewel’s ‘Revival Fire’ and ‘Revival fires and Awakenings’ by Matthew Backholer, and ‘In the Day of thy Power’ by Wallis, and I would say that this would be a pretty good starting point to the literature on revival.

I admit I’ve not read it all so far, but what I have read is accurate with other accounts, and Geoff Waugh clearly has a heart to see God move. He helpfully summarises the features of biblical revivals as well as historical ones and recognises that revival has often not been documented because revivals have been suppressed by the established church and also those who have led revivals were not writing things down.

I do like the listing at the front which shows that Waugh is fairly comprehensive in the number of revivals he tackles – this is reminiscent of Backholer who is also very global in his treatments. Already I want to read even more now about the Moravians just from the short account included. John Bookman
Powerful 6-minute video – Do it again Lord

Uzbekistan: An ancient city experiences revival – 2022
China – New Wave of Revival – 2016
China – Chinese turning to Christianity – 2000s
China – Revival Breaks Out in China’s Government Approved Churches – 2000s
China – How Christians respond to the coronavirus outbreak – 2020
China – The cross on our shoulders and in our hearts – 2020

OUTPOURINGS – I will pour out of my Spirit

Some Revival accounts to 2020 into the 21st century

Blogs and videos about God’s Surprises:

If my people who are called by my name humble themselves, pray, seek my face, and turn from their wicked ways, then I will hear from heaven, and will forgive their sin and heal their land. (2 Chronicles 7:14)