Converted at nine, he had a missionary zeal.  As a teenager, Reinhard saw Johannesburg in South Africa in a vision of a map of Africa.  At 19 he headed off to the Bible College of Wales to train as a missionary, even though he couldn’t speak English.  Three months later he was preaching in English!  There he learned practical principles of living by faith.

After a short pastorate in Germany where he married Anna, they left for German Pentecostal missionary work in Africa.  Working as traditional missionaries from 1967 to 1974 in Maseru, the capital of the small landlocked country of Lesotho, they saw meagre results. 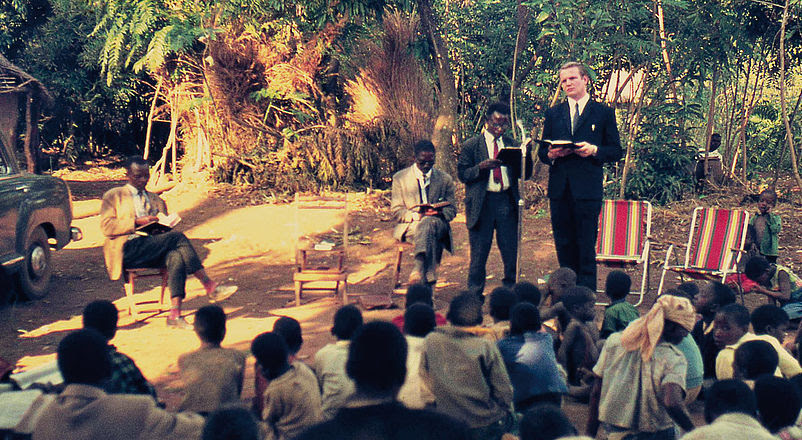 Near the end of that time Reinhard’s interpreter broke down during his message at a healing meeting one Sunday morning and sank weeping to the floor because of God’s awesome presence.  Waiting for the interpreter to recover Reinhard ‘heard’ the Lord speak ‘words’ which amazed him: “My Words in your mouth are just as powerful as My Words in My own mouth.”

The ‘voice’ repeated the sentence.  He ‘saw’ it like a movie in Scripture – Jesus told the disciples to speak in faith and it would happen.  “I suddenly realized that the power was not in the mouth – the power was in the Word,” said Reinhard.

Then, when the interpreter had recovered enough to speak, as he was preaching Reinhard ‘heard’ the Spirit say, “Call those who are completely blind and speak the Word of Authority.”

He did.  About six blind people stood.  He boldly proclaimed, “Now I am going to speak with the authority of God and you are going to see a white man standing before you.  Your eyes are going to open.”

The power of his voice jolted even those on the stage.  It felt as though a flaming bolt of lightning was let loose in the building.  His voice was still resonating against the bare brick walls when there was another shout.  This time it was the shriek of a woman’s voice.  What she screamed shattered the silence that hung over the congregation: “I can see!  I can see!”

She had been totally blind for years.  The other blind people also saw.  The place erupted in excited cheers.  A woman handed her crippled boy through the milling crowd to Reinhard who sensed the power of God on the boy and watched amazed as his crippled legs shook and straightened.  He was healed.  The meeting went for hours as people screamed, shouted, danced and sang.

At the end of 1974, Reinhard relocated to Johannesburg and established Christ for All Nations (CFAN).  Early in January, when he was ill, he had a vision of Jesus similar to the Joshua’s vision (Joshua 5:13-15).  He wrote:  “I was very sick.  I didn’t think I would make it.  I went to doctors.  Nothing helped.  I was crying to God: ‘Lord what are you doing?  What is your plan?’  One afternoon I retired to my study.  A thirst for prayer came over me and I was hardly on my knees when I saw a most wonderful vision.  I saw the son of God stand in front of me in full armour, like a general.  The armour saw shining like the sun and burning like fire.  It was tremendous and I realised that the Lord of Hosts had come.  I threw myself at His feet.  I laughed and I cried … I don’t know for how long, but when I got up I was perfectly healed.”

When Reinhard flew to Gaberone in Botswana to buy time on radio there the Lord told him to hire the 10,000 seater sports stadium for a crusade.  The local Pentecostal pastor who agreed to help prepare for the crusade was amazed.  He had only 40 in his congregation!

The crusade in April 1974 with Reinhard’s evangelist friend Pastor Ngidi started in a hall which could seat 800.  On the first night 100 attended.  Healings happened every night, abnd people fell to the floor overwhelmed.  That was new to Reinhard.

By the end of the first week 2,000 people were packed into the hall.  So they moved into the stadium!  Thousands attended.  People were saved and healed every night and over 500 people were baptised in water within two weeks.

About 1,000 people responded to the call to be baptised in the Spirit.  As soon as they raised their hands they were all flattened shouting and praising God in new languages on the ground.  Reinhard had never seen anything like that before.  It continued to happen in his crusades.

Reinhard used an enormous tent which could seat 30,000 people.  Then the crowds grew so large no tent could hold them.  Some of CFAN crusades in Africa have reached huge open air crowds of 600,000 to 800,000 people and even over 1 million.

Reproduced from Flashpoints of Revival and Revival Fires.

See also: “This Disco is a Church”

One Reply to “Reinhard Bonnke’s beginnings in Africa”