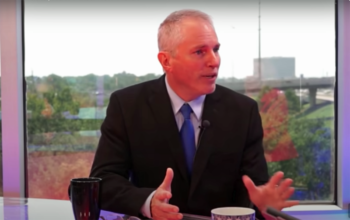 Dr. Richard Bartlett is a strong Christian who says God led him to find a winning treatment protocol to defeat Covid-19.

Last March, the Texas M.D. prayed for inspiration about treating the coronavirus, and during a brief nap between patients something remarkable happened. God supernaturally downloaded a treatment strategy that has proven to be highly effective with his Covid-19 patients.

His God-inspired treatment plan uses an inhaled steroid often used by asthma patients called Budesonide (dexamethasone), administered through a nebulizer, a device that delivers a medicated mist inhaled into the lungs. He also uses the antibiotic clarithromycin to combat secondary bacterial pneumonia. He also gives zinc to his patients, because it interferes with virus multiplication.

Dr. Anthony Fauci testified before the U.S. Senate Committee on Coronavirus Response on September 22nd, and cited dexamethasone as one of the most promising therapeutics: “Dexamethasone, a commonly used steroid, has been shown in a randomized, placebo-controlled study involving more than 6,000 individuals to clearly and significantly reduce the 28-day mortality,” he stated before the committee.

Researchers at Oxford University and Queensland University discovered that Budesonide and two other steroids improved survival rates by more than one-third in severely ill patients.

The new studies used data from seven randomized clinical trials evaluating three steroids in more than 1,700 patients. The study concluded that each of the three drugs reduced the risk of death.

“Yesterday (September 9th) it came out from Oxford University and the University of Queensland, that inhaled budesonide against Covid could cause at least 50% of the people to not have to be hospitalized,” Dr. Bartlett noted.

Using his approach, he says the vast majority of his patients have been able to stay out of the hospital and recover, even if they have oxygen saturation in the 80s.

Dr. Bartlett is quick to credit God for the inspiration behind the protocol. “This is wonderful news, but it is exactly the treatment the Lord gave me back in March.”

“Every good thing comes from God, even every good idea. He is the inspiration for the truth. I love the Scripture that says he will make a way when there is no way. Jeremiah 33:3 says to call on God and he will show you secret things you did not know. He did that with Coronavirus and little old me.”

Dr. Bartlett set up a network of doctors and providers around the United States who are using his treatment approach, which may be accessed through the website, www.Budesonideworks.com.

One of the nurse practitioners using his protocol has treated 172 patients as of September 20th, covering a 74-day period. All patients successfully recovered except for one, a 94-year-old who reached out for help on day 17 of their illness & was already struggling, the nurse practitioner reported to Dr. Bartlett.

“Everybody deserves to have undivided attention. We have probably treated a thousand that have funneled through me. We are getting calls from around the country, people thanking me I’ve never met, who saw the video and talked their doctors into treating them with my protocol and they recovered.”

Dr. Bartlett also believes in early treatment of Covid, which has gone against the conventional wisdom. Bur once again, another study with 24 authors from Yale, Emory and other universities confirmed the epidemiological basis for early treatment. “That is the opposite of what we’ve been told,” he noted.

“They say if you have mild to moderate symptoms, wait at home. Late care only has been the strategy. This paper with 24 authors says early treatment, and that supports what I’ve been saying.”

Dr. Bartlett has been a Christian since the first grade when his teacher, Mrs. Only — who also happened to be his Sunday School teacher — led him to Christ. “I have been blessed to have parents that are believers, parents that stayed married, love each other and love God. I was protected and provided for; my mother was a prayer warrior. I wish that for everybody.”

“Jesus is the way, the truth, and the life. There is no hope without Jesus. God saves, God heals and I don’t. He is the healer. He is the one who cures.”

Dr. Bartlett believes he has found another tool to help fight Covid. “I have uncovered another breakthrough but I can’t talk about it right now. I am convinced that Covid has met its match. Covid is on its last breath,” he says.

He cannot label his treatment protocol a cure, or he would get in trouble with government authorities. “I won’t say they are getting cured because that would trigger people who don’t like good news. They are recovering and they are alive and back to work and back with their families. I call that success and good news.”

Dr. Bartlett and his wife have six adopted children, three from other countries. At age 40, his wife started feeling bad and thought she might have a brain tumor. “We had tried to get pregnant for 20 years,” he recounts.

But instead of a tumor, his wife discovered she was expecting a baby. “God makes a way where there is no way. He answers prayer over and over again.

“In the natural, every year your chances become smaller and smaller, but not with God. When I look at a 12-year-old boy I see God answers prayer. God is sensational. We had done everything people do to get pregnant, following the advisors. It was truly a miraculous answer to prayer.”

“Our God is the God of the living, not the dead. He is a living God and he answers prayer. God hears and God sees.”

Dr. Bartlett has gone on a number of medical mission trips with World Missions Alliance and has seen God move in remarkable ways on the trips. “I am convinced the mission God has me on right now is Covid,” he says.

Budesonide is the solution for many to “I can’t breathe.”:

If you want to know more about the treatment protocol described above, go here