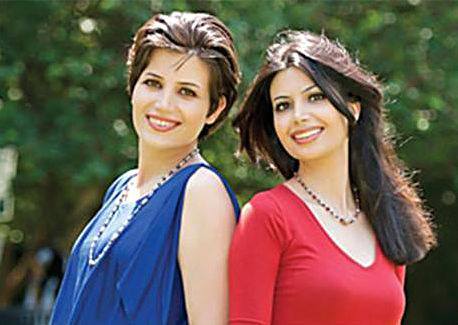 Maryam Rostampour and Marziyeh Amirizadeh knew they were putting their lives on the line. Born and raised as Muslims, both women grew unsatisfied with the teachings of the Koran and converted to Christianity after personal encounters with Jesus. Though Islamic laws in Iran forbade them from sharing their Christian beliefs, in three years they’d covertly put New Testaments into the hands of twenty thousand of their countrymen. They’d started two secret house churches, including one for prostitutes – many of them women who had been abandoned by their husbands and had no other way to support themselves and their children.

“We both had the same vision from God for evangelizing Iranian people by distributing Bibles. God showed me how Iran is like a land that needs seed. He told me, ‘I will raise and grow this.’ Maryam also had a dream about this, so we became sure it was God’s will,” explains Marziyeh. “We decided to cover all parts of Tehran. We usually went at night and distributed Bibles into mailboxes. Every day we went shopping or to restaurants and talked to people, often handing them a New Testament. We also started a house church for young people and another for prostitutes. All of this is illegal and dangerous because no one is allowed to talk about any religion except Islam. During this time, we could see God’s miracles every day. We have many stories of how God protected us.”

But finally – perhaps inevitably – in 2009, the two young women were arrested. For some reason in the months before that, they were unable to hand out Bibles, as the Holy Spirit took away their desire to evangelize. “We knew something would happen, that there would be a change in our lives. Only after we got released we heard from one of the security police that they were watching us for two months before arresting us. But they couldn’t prove we were handing people Bibles. We believed it was God’s protection for us.”

“After hours of praying and singing, we felt God’s peace in our hearts.”

The two women were held in the notorious Evin Prison in Tehran, a place where inmates are routinely tortured, and executions are swift and sudden.

“Our first night in prison, we both were so scared,” recalls Maryam. “We had no power to speak. The first thing the security police tried was physical torture. They put us in a dark, cold cell and said they would come to torture us. We just hugged each other and said goodbye, thinking it was the last day for us. We began to pray for each other. After hours of praying and singing, we could feel God’s peace in our hearts. But it was not easy. Every day was mental torture. In interrogation they threatened our families, which was even worse than hearing about execution.”

“One day they invited a university professor in to convince us to deny our faith. He told me that if I was one of his family members he wouldn’t wait for the court’s decision – he would have killed me himself,” says Maryam. “We went to something like 10 courts, and in each court the judges would threaten us with execution,” says Marziyeh. “But the hardest part was the execution of other prisoners. I never experienced such a difficult thing. After the execution, there was this spirit of sorrow and death everywhere, and sometimes we couldn’t say anything. Everyone was under pressure.”

But in the face of chilling interrogations and intimidation, something remarkable happened: instead of succumbing to fear, they chose to take the radical – and dangerous – step of sharing their faith inside the very walls of the government stronghold that was meant to silence them. They found the prison being fertile ground for the gospel.

“Prison was like a church every day. We gathered and prayed.”

“Prison is the place where most people are hopeless,” Marziyeh says. “They all need someone to save them. The prisoners were open to hear about Jesus and many were asking us to pray for them. Before we were imprisoned, we would ask God to show us whoever he chose, and that we would be able to talk to those people. But detention and prison increased those opportunities, since it was like a church every day. We gathered and prayed. It was easier to evangelize because we were already in prison.” “We just tried to love them,” Maryam says. “This had a great affect on most prisoners and even the guards.”

“Prayer was the only thing that helped us, strengthened us,” says Marziyeh. “Sometimes we couldn’t even pray in Farsi, our language. We didn’t even know how. Many times we were praying in tongues. We witnessed power in prayers, especially in difficulties. We could see the miracles of God every day and it made our faith stronger. We didn’t have a Bible with us in prison, but every day we could touch God. We could touch Bible verses inside the prison because we were living them. We learned how to forgive our enemies. We remembered how Jesus forgives our sins and how he suffered for us.”

After international pressure from the United Nations, Amnesty International, and other human rights groups, the women were released. They left Iran to continue ministry through writing and speaking in the United States. In their book ‘Captive in Iran’, Maryam and Marziyeh recount how God used their 259 days in Evin Prison to bring about a miraculous reversal: shining light into one of the world’s darkest places, giving hope to those who had lost everything, and showing love to those in despair.

There is an ongoing underground revival in the Muslim world. Over the past 20 years more Muslims have found Isa (Jesus) then in all the previous centuries together. See links:
Iran: where Christianity is growing fastest
Iran – fastest-growing evangelical population
Many Muslims are turning to Christ
Jesus and Muslims: Life in the desert
18,000 Muslim leaders led to Christ in West Africa
Jesus appears to Middle Eastern Muslim for a month
Iman hated Christians until Jesus raised him from the dead
Muslim woman returns from the dead to tell about Jesus

Remember those in prison