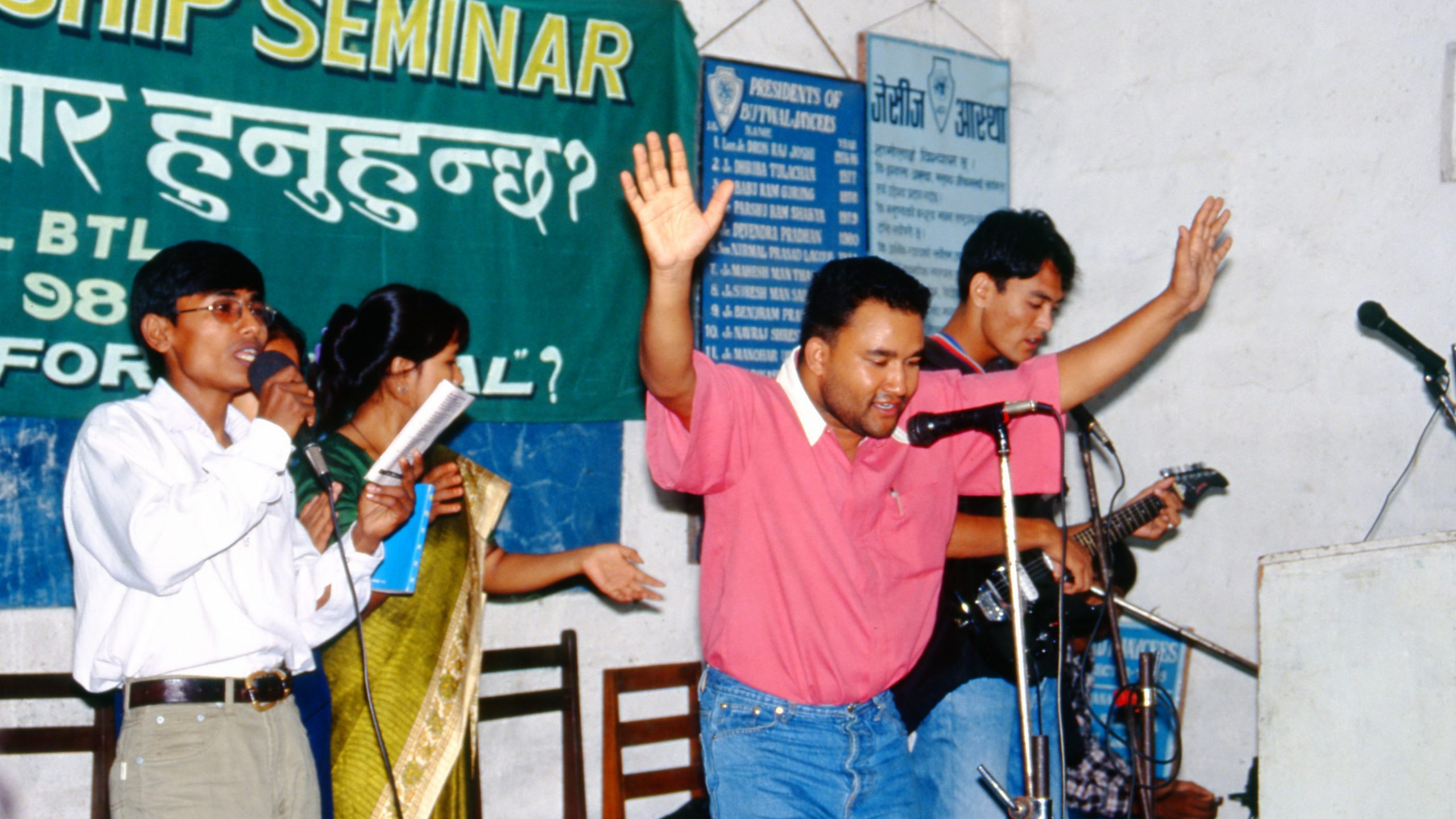 Adapted from Chapter 9 of God’s Surprises by Geoff Waugh

Bob and Jill Densley, friends of mine, worked with the United Nations in Nepal and they loved to help pastors and leaders there. That’s how they met and supported the fiery young evangelist pastor Raju Sundas. We visited them many times in the 1990s and spoke at pastors and leaders meetings in Kathmandu, in West Nepal and in East Nepal, hosted by Raju. Some of those pastors walked for two or three days across the high ranges just to attend the meetings.

Their churches, led by Hosanna Church, are saturated in prayer. I prayed in their “Power House”, the upstairs prayer rooms of their church in Kathmandu. Those small upper rooms were open 24 hours a day and many people went there to fast and pray, sometimes for many days. Since then, Hosanna Church and its ministry has exploded and planted so many churches across Nepal, developed schools, vocational training, Bible Schools, and huge welfare ministries to the needy.

We saw God’s Spirit move beautifully and powerfully in those early meetings. Many were filled with the Spirit and healed. I heard a young man from one of their church bands praying eloquently in beautiful English – but he cannot speak English. They pray for one another with strong faith, expecting God to save, heal, deliver and anoint them.

The dedication of those Christians impressed me. Most of them had been imprisoned for their faith many times. One young pastor conducted a Christian wedding which infuriated relatives so they complained to the police and he spent a month in prison for disturbing the peace. Our host had been severely beaten while in prison.  Two young evangelists were shot to death when we were there. They had returned from Bible College in India and were accused of spying. God gives those Christians amazing peace and joy amid the persecution, just as in the Book of The Acts.

We were greatly blessed to see the zeal, faith and perseverance of Raju and his team as we shared ministry in Hosanna Church in Kathmandu as well as with them in conferences in West and East Nepal. Their faith opened the way for God to move in power among them all as He poured out his Spirit, especially on leaders, pastors and on their people.

Pastor Raju Sundras (Photo), our host for our visits, tells about our visit there at Easter 2000.

Greetings in the name of our Almighty God Jesus Christ from the land of Himalayas!  The Lord continues to do great things in this land, we have not much to do but to praise Him and thank Him for every good gift raining on us from Him and only Him.

It was a great blessing from the Lord to send us a team from Australia mid-April. The fellowship, the Word from God, the mighty touch of the Holy Spirit, the love of Christ flourishing from our Australian brothers and sisters, the awesome presence of the Lord throughout the rushing schedule of conferences, trips, and visits, overwhelmingly expressed the great love of our Lord Jesus Christ towards this nation.  During the short stay of about two weeks with the team of eight people we had the privilege to see the ministry of the Holy Spirit through them in several occasions. …

Out of about 200 participants in the conference by the grace of God 100 of them were baptized in the Holy Spirit praising the Lord, singing, falling, crying, and many other actions as the Holy Spirit would prompt them to act.  About ten of them testified that they had never experienced such a presence of the power and love of God.  Some others testified being lifted to heavenly realms by the power of the Holy Spirit, being surrounded by the angels of the Lord in a great peace, joy, and love toward each other and being melted in the power of his presence.  Many re-committed their lives to the Lord for ministry by any means through his revelation.

On the second day of the conference the trend continued as the people seemingly would fall down, repent, minister to each other in the love of Christ, enjoy the mighty touch of the Holy Spirit, singing, prophesying, weeping, laughing, hugging, and all the beauty of the Holy Spirit was manifested throughout the congregation by his grace and love.  One woman of age 65 testified that she never had danced in her life in any occasion even in secret, but the Lord had told her that she should now dance to him and she was dancing praising him with all her strength.  For hours this outpouring continued and the pastors of the churches were one by one testifying that they had never experienced such a presence and power of God in their whole Christian life and ministry.

Some 60 evangelists declared that they were renewed in their spirits by the refreshing of the Holy Spirit and they are now going to serve the Lord in the field wherever the Holy Spirit will lead them to be fully fledged in His service.  In the last day of the conference while praying together with the congregation and committing them in his hands, many prophesied that the Lord was assuring them of great changes in their ministry, life and the area.  While the power of God was at work in our midst three children of 6-7 years old fell down weeping, screaming and testifying about a huge hand coming on them and touching their stomachs and healing them instantly.  After the prayer all the participants got into the joy of the Holy Spirit and started dancing to the Lord, singing and praising Him for His goodness.

Before leaving Gochadda while we were having snacks in the pastor’s house a woman of high Brahmin caste came by the direction of the Lord to the place, claiming that she was prompted by a voice in her ear to go to the Christians and ask for prayer for healing of her chronic stomach pain and problems, and that is why she was there.  We prayed for her and she was instantly healed and we shared the Gospel, but she stopped us saying, “I need to accept Christ as my Saviour so don’t waste time!” She accepted Jesus as her personal Saviour being lifted in spirit, and even the body as she said she didn’t feel anymore burden in her body, and spirit, Hallelujah!

We held another conference in Nazarene Church pastored by Rinzi Lama in Kathmandu.  Ten churches unitedly participated in the two days gathering where about 100 people participated.  The outpouring of the Holy Spirit continued in this conference refreshing many in their spirits and bringing much re-commitment. We showed the Transformation video.  All committed themselves for constant prayer to bring transformation to their cities too by God’s power.

Geoff and the Himalaya mountains

Adapted from Chapter 9 of God’s Surprises