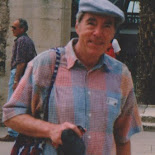 Acts 3 cripple healed – acted out in faith in PNG

Acts 3 tells how Peter and John went to worship in the temple and Peter commanded healing in Jesus’ name for a man over 40 crippled from birth.

But Peter said, ‘I have no silver or gold, but what I have I give you; in the name of Jesus Christ of Nazareth, stand up and walk.’  And he took him by the right hand and raised him up; and immediately his feet and ankles were made strong. (Acts 3:6-7)

That still happens, worldwide. Here is an example from Papua New Guinea, reported in 1990 by Dutch missionary Johan van Bruggen, then principal of the Lutheran Bible School at Kambaidam near Goroka in the highlands on PNG.  See Late Twentieth Century Revivals

This is what happened about two months ago. A new church building was going to be officially opened in a village in the Kainantu area. Two of our last year’s graduates took part in the celebrations by acting the story in Acts 3: Peter and John going to the temple and healing the cripple.

Their cripple was a real one – a young man, Mark, who had his leg smashed in a car accident. The doctors had wanted to amputate it, but he did not want to lose his useless leg. He used two crutches to move around the village. He could not stand at all on that one leg. He was lying at the door of the new church when our Peter and John (real names: Steven and Pao) wanted to enter. The Bible story was exactly followed: “I have got no money, but what I have I give you. In the name of Jesus Christ of Nazareth, rise up and walk!”

Well, they acted this out before hundreds of people, among them the president of the Goroka Church District and many pastors and elders. Peter (Steven) grabbed the cripple (Mark) by the hand and pulled him up. And he walked! He threw his crutches away and loudly praised the Lord! Isn’t that something? What a faith!

Their testimony was given at a meeting of elders when Kambaidam was discussed. Mark was a most happy fellow who stood and walked firmly on his two legs. He also had been involved in criminal activities, but in this meeting he unashamedly confessed his faith in the Lord Jesus.

Later I talked with them. Steven (Peter) told me that the Lord had put this on his heart during a week-long period of praying. “I had no doubt that the Lord was going to heal Mark, and I was so excited when we finally got to play-act!”

And Mark? He told me that when Steven told him to get up he just felt the power of God descend upon him and at the same time he had a tingling sensation in his crippled leg: “I just felt the blood rushing through my leg, bringing new life!”

Mark is now involved in evangelistic outreach and his testimony has a great impact.

Reproduced from Flashpoints of Revival and South Pacific Revivals.

Back to Revivals Index

He woke up totally healed in Ghana