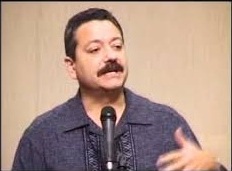 The crime rate fell by 93% within 18 months.
Even the United Nations cannot understand how this happened!

TRANSFORMING YOUR CITY – THE EXAMPLE OF JUAREZ, MEXICO

Recently in Albuquerque, New Mexico, 140 ministry leaders and public officials were electrified to hear the testimony of Pastor Poncho Murguia. Poncho after leading a large and successful mega church for years was instructed by the Lord to “leave everything” and to go to a city park in his native Juarez, Mexico in order to fast and pray for three weeks over the city. During that process, he learned for the first time to really love and understand his city and then to “adopt” the city. Eventually 4000 other believers in Jesus joined him in a movement of transformational prayer and action that has changed Juarez from “the murder capital of the world” with violence 25 times as much as any on other city on earth, to one of the safest of Mexico’s cities.

At the height of the violence that swept the city which had become the site of a prolonged turf battle between drug cartels, 20-30 people were being assassinated by “sicarios”, hit men paid an average of $50 to kill anyone. They killed a young man just as he was being married to his fiancee in a church and freely machine-gunned peace-loving people who were having dinner in restaurants. There were also an average of 10-15 kidnappings per day and if loved ones did not pay the ransom that was demanded, their family member would have his ears or fingers amputated first and if there was still no payment, he or she would be killed and buried under the floor of the “safehouse” that served as their prison.

Twenty percent or 300,000 people left the city; 30% of the businesses closed. The cartels made lists of police officers and systematically assassinated them one by one to terrorize and exact concessions. The smell of blood filled the streets. Such overwhelming violence that the police and even the army could not control finally drove the pastors of the city’s churches together in prayer. They humbled themselves before the Lord, taking responsibility for the situation since they had been occupying themselves with their own congregations and “building their own kingdoms” without a real love and concern for the whole city. As they underwent this process together, God demonstrated His presence and the crime rate fell by 93% within 18 months. Even the United Nations cannot understand how this happened!

Other wonderful transformations happened and as they “adopted” the “sicarios”, many of these vicious hit men came to Christ and were discipled to serve Him back in their own towns across Mexico. Poncho challenged the Church and ministry leaders to tackle problems in our communities that the government and police are not being effective in fixing. The church he said spent too much time studying the Bible when God wants us to “be the Bible” to our needy city. Those who heard Poncho’s testimony were deeply challenged to apply what we learned. Many went home determined to see a transformational movement happen in their communities.

Watch video: Man who transformed murder capital of the world

We often forget to do things God’s way!

If my people who are called by my name humble themselves, pray, seek my face, and turn from their wicked ways, then I will hear from heaven, and will forgive their sin and heal their land.
(2 Chronicles 7:14)

2 Replies to “Transforming your city – example of Juarez, Mexico”